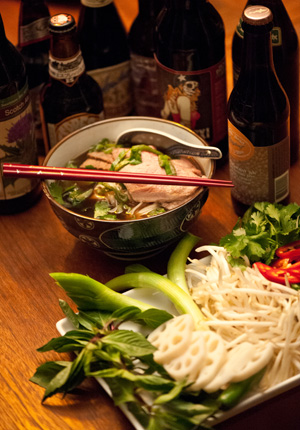 What is Vietnamese Pho?

Pho (pronounced “fuh,” not “faux”) is a traditional Vietnamese soup made with a savory spiced beef broth and rice noodles. A rich, heavily seasoned broth is poured over tender rice noodles and served alongside a platter of vegetables and thinly sliced meat. These are added to the soup, depending on personal taste and desires. Some hot sauce, slices of chili, fragrant herbs, bean sprouts and limes wedges round out the topping choices, that when combined, feed the soul. That’s the classic Vietnamese Pho preparation. To take this recipe into Beer Cuisine territory, mixing in beer to the broth adds more complexity and rounds out the flavors. Depending on the cooking with beer style brew, roast, melanoidin, caramel, toffee and other malt tones compiment the beef bone broth, enhancing the roasted ginger, toasted star anise, caramelized onions and other Asian spices. This Vietnamese Pho | Beer Pho recipe is a base soup | broth that can be used as described here, or transformed using pork or lamb meat | bones for the broth to create a variation of the original Pho.

Makes: 6 – 8 quarts of broth, which can also be frozen for a later meal, yielding about 16 servings 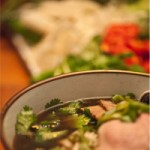 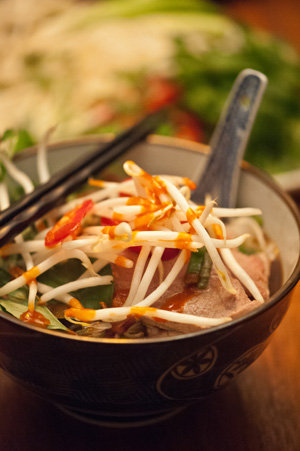