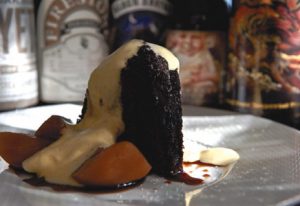 Bourbon Barrel-Aged Imperial Stout Gingerbread Cake recipe brings together a wonderful flavor combination of ginger and stout style beer are the center point in this recipe, creating a rich, moist and flavorful cake.  This dessert will warm the soul on any cold winter night, as freshly grated ginger, dried ginger and crystallized ginger pack that ginger punch.  The use of a Russian Imperial Stout in the dessert recipe adds the roast, coffee, chocolate notes that work so well with the heat and flavor of ginger.  The alcohol percentage of this beer style also aides in distributing all the flavors across the palate.

This cake is great as is or topped with a sabayon sauce to give a counterpoint in both texture and flavor for the palate to further enjoy. 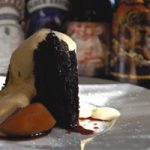