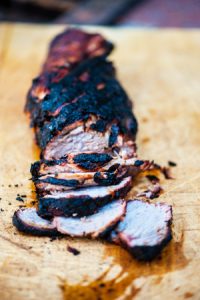 In Chinese cuisine, you’ll find this pink pork hanging in glass windows, called Char Siu or Chinese-Style BBQ Pork. Used in stir-fries, fried rice, noodle dishes, egg rolls, or served as is, sliced over a bowl of rice. This recipe still has that pink hue, but instead of relying on red food color #5, I used red beets, which add natural color and an earthy undertone. This earthy flavor, along with a Stout-style beer, enhances the marinade’s roasty element. With umami-rich soy sauce, miso, and hoisin sauce, the extra dimensions this marinade adds to any protein, is crazy good.  My goal was to make a better Chinese-Style BBQ Pork, yet I can see this marinade used on tofu, tempeh to be vegan, or added to chicken, duck, or even a hanger steak… 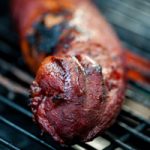