Bacon, Pork and Beer Stuffing, in a Pumpkin 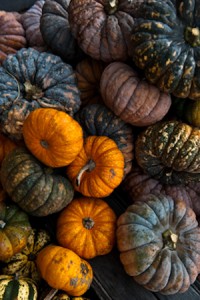 When mother nature gives you pumpkins, why not use them?  This stuffing recipe uses a hollowed out pumpkin | heirloom pumpkin | winter squash as a cooking dish, that the stuffing is place into and roasted.  As cooking stuffing in a turkey is has several issues, food safety with the temperature of the stuffing coming up to a safe to eat temperature of at least 165°F | 74°C, the turkey surrounding the stuffing is overcooked, dry and a disappointment.   Using the pumpkin as a cooking vessel versus a casserole dish exposes less surface area of the stuffing while cooking, so it steams with the pumpkin as it cooks, creating a moist texture similar to stuffing that comes out of a turkey, making an excellent side dish, that is also an edible serving dish. 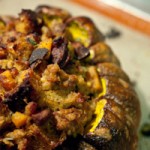 Bacon, Pork and Beer Stuffing, in a Pumpkin
A bacon, pork and sage stuffing, moistened with craft beer and stuffed into a hollowed out heirloom pumpkin and roasted.
Ingredients
Servings: guests
Units:
Instructions
Recipe Notes

For a vegetarian version, add the sage or pumpkin seeds to the sautéed vegetables, omitting the bacon and pork.

Beer Pairing Suggestions:
With the bounty of seasonal and holiday craft beers filling the shelves, create a flight of different beer styles to pair with these two Thanksgiving staples, taking account of all the other side dishes on the table. Try some new brews and some of your favorites, looking at similar and contrasting flavors to pair. Beer styles with lots of melanoidin character will enhance the natural turkey flavor, along with the sweetness found in pork.