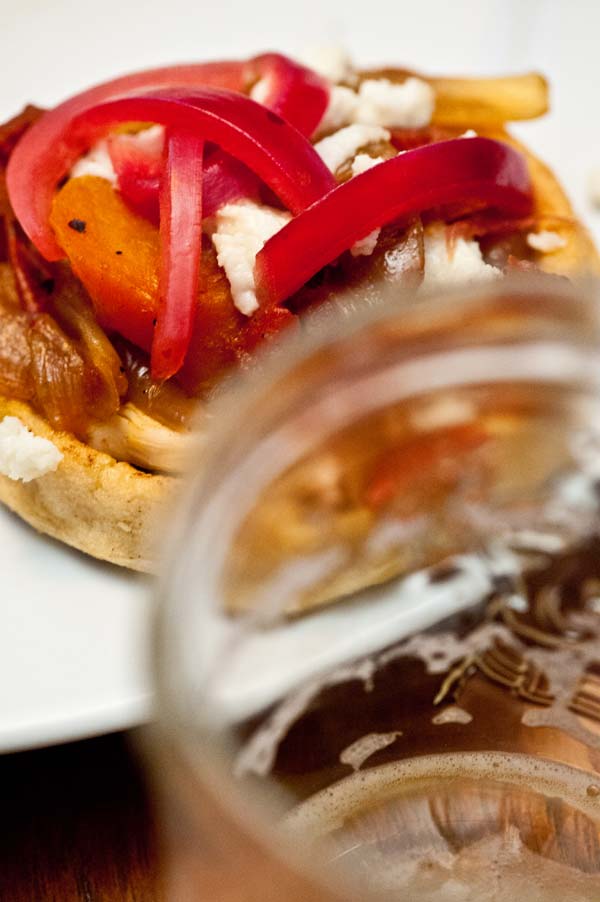 Sopes are what I call the ‘tortilla 2.0’.  It’s a masa based tortilla where the sides are pinched, to create a bowl shaped eating instrument.  They are then fried and become crispy and tostada like, except able to hold more with the sides, and small in diameter.  The filling option are as endless as the creativity to fill them. This recipe for Sopes filled with Mexican Style Beer Stewed Chicken and Malt Pickled Red Onions has all the tastes and textures of a comforting Mexican meal.

You can easily make sopes with a regular masa dough, made from corn that is soaked in lime (calcium hydroxide), cooked then ground.  This process of soaking dried mature corn (not your everyday corn on the cob), soaking it in a diluted solution of wood ash (lime or calcium hydroxide) to react with the corn kernel, breaking down niacin, so that our digestive tract can uptake the now available nutrients.  This transforms the corn to a different consistency, when compared to corn kernels from yellow or white corn, dried and made into polenta, grits, corn meal or flour.  The now transformed corn when dried and ground becomes masa harina or masa seca.  These two products become tamale and corn tortilla dough when mixed with water.

I bring up this transformation of the corn, because it relates to potential issues of DMS or dimethyl sulfide.  In the beer world of judging, DMS is considered an off-flavor in most beer styles.  When barley is germinated, after it is first been harvested and dried,  a compound S-methylmethionine is created.  This compound will is a precursor to dimethyl sulfide.  When water is added to the malted barley, the enzyme action of creating the starch found in the barley kernel into sugar, S-methylmethionine is transformed into dimethyl sulfide.  This in every kernel of malted barley, made into base or adjunct malt.  Pilsner malt has 8 times more dimethyl sulfide than that of a highly kilned roasted barley.  Most lager styles of beer use a large amount of pilsner malt.  Many German lager styles of beer are the same as many of the Mexican style lagers we are served at a Mexican restaurant.

To reduce the amount of potential dimethyl sulfide found in a finished beer, a long hard boil will help volatilize the DMS, removing it from the wort.  With a proper fermentation, this will further the removal of DMS.  Regardless of all the steps a brewer and maltster takes, there is always DMS in fermented beer, it comes to how many parts per million or billion they are and if you can taste it.  This comes around to how we all taste.  Are sensitivities to certain foods and flavors varies between each person, cultural background and genetics.

When pairing beers with corn or corn by-products this is an important issue to consider.  When pairing beers,, both ales and lagers, made with or containing corn, you as adding DMS.  This varies depending on the amount of the corn and what type it is being added.  Think polenta, corn grist, corn meal, fresh corn kernels (roasted, sautéed or raw), corn oil or stock made from corn cobs to corn husks used to steam food, creamed corn and buttered popcorn.  All these corn products will increase the amount of dimethyl sulfide that the beer already has and create an off flavor to the pairing.  When crafting a beer dinner, the last thing a chef wants to do is create an off flavor in a beer that doesn’t have this beer flaw.  This comes back to the ideal of Respect Beer.  I have learned this over the years, with all the dinners I have designed and all the brewing I have done over the years.  This concept of pairing is a point that differs from pairing with wine or other alcoholic product.  If a beer has DMS issues, the last thing you want to do is add more corn.  The idea of any beer dinner is to enhance the beer, not bring a flaw to the forefront of the palate.

Since the soaking of the corn with lime breaks down the corn kernel in many different ways, it further changes the flavor of the corn, lessening the corny flavor.  When fried, it further changes the flavor.  It’s still there, but when tasting the pairing see if this combination of flavors brings this DMS issue out in the food.  My idea with this recipe was to create enough different strong and bold flavors to over power any DMS additions that the masa might bring to the palate.

Sopes are created from a masa dough formed into a circle about 4 inches in diameter and fried.  There are several other styles of ‘sopes’ while still made with the same based dough, but formed into different shapes.  Chalupa are formed into more of a corn cup, than a disk shape of a Sope.  Huarache are formed into more of a large sandal shape where it gets its name from.   Tlacoyo are shaped into a oval or torpedo shape, filled with beans and cheese, then fried and filled with toppings and served.  Garnacha is more like a taco, then a sope, as the fried dough is not as thick as sope.

Fillings for sopes can very from different regions of Mexico.  Traditionally sopes are filled with a refried bean (black or pinto), crumbled Mexican cheese (such as Queso Fresco or Cotija), shredded chicken, thinly sliced iceberg lettuce, chopped white onion, salsa and a drizzle of Mexican crema (similar to crème fraîche or sour cream).

This is my version of a “sope de pollo”.  I hope you enjoy. 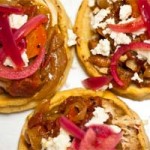 I like to pair these style sopes with a Vienna Lager or Munich Helles Lager.  The Malt Pickled Red Onions add a bit of acid to balance out the refried beans, smoky notes from the malt forward Smoked Doppelbock used to stew the chicken thighs and the tart from the crema.  These flavors will pair nicely with these styles of lagers.