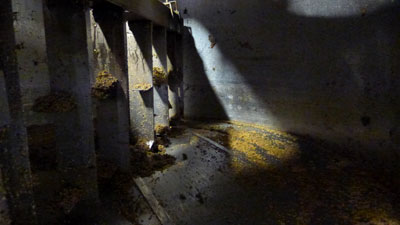 As a chef, I try to use all of a product, maximizing yields in a recipe, minimizing waste to make a profit. As the saying goes, when life gives you lemons, you make lemonade… Maybe some lemon bars, some lemon-flavored salt or sugar… As a brewer, malted barley, wheat, oats, and other grains are infused with water at different temperatures, breaking down the starches in the grain into sugar, to create a ferment-able liquid called wort. Yeast is added to consume the sugars in the wort, creating beer. The mixture of grain that makes up a batch of beer is called the grist. Depending on the type and style of beer being made, different ratios of malted barley are incorporated to achieve the right mix of flavors to the final brew. A brewers recipe for beer will always create spent grain, its a byproduct of the brewing industry, home brewing, or commercial. The flavors of this waste will change, depending on the beer style, yet the nutrition, texture, and fiber will remain the same. To take the Home Brew Chef approach, blending the two worlds of cooking and brewing, I wanted to help teach you how to make Homemade Brewers Crackers with Spent Grain.

This cracker recipe is different from a standard homemade cracker recipe, as you must have spent grain to make them. If you are a brewer, at a brewery, or in your own home, then this is pretty simple. Make beer, save the spent grain, make crackers.  If you aren’t a brewer, don’t know a brewer, then you would need to first go to a brewery and ask (maybe call ahead) and see if they could set some spent grain aside for you. Regardless of how you obtain the spent grain (hopefully legal!), try to find out what style of beer the spent grain comes from. This will help you understand what varieties of malted barley and other grains might be in your final selection.

I bring up identifying the beer style of the spent grain, as the flavor profile of a Pale Ale | IPA are going to be pretty similar, just a lot of base malt or 2-row malted barley. If the spent grain is from a batch of Porter | Stout the ratio of roasted barley, to base malt will be different, resulting in a spent grain with more coffee, chocolate, and roasted notes, that will be noticed in a final Homemade Brewers Crackers with Spent Grain. As this recipe is a base recipe, you can modify the ingredients and the toppings to highlight different flavors found in the malt, that was used to make the original beer.

Now, with the brewing process, the wort is where most of the starches, converted into sugars was used. The grist is designed to maximize the beer style flavor. The spent grain is missing most of that starch, sugar, and resulting flavor. What remains in the spent grain contains some proteins, little unconverted starches, and lots of fiber, from the husk and interior of the barley kernel. This is why this recipe calls for the addition of flour (from wheat, which contains gluten), to make a dough that can be made into crackers.

It is also important to, as a chef, understand your ingredients. Spent grain has been soaked and then (usually) rinsed with water to remove as much of the converted sugar from the grain as possible. The resulting grain has soaked up a lot of water and is wet, or as I will refer to it as wet spent grain. This wet spent grain will spoil very quickly, as in 24 hours, if un-refrigerated. How will you know if your spent grain is still good? Easy, smell it. If it starts to have the aroma of barf, sour, and not pleasant, let it go and don’t use it. The wet spent grain is fine to use if it smells of malt, roast, bread, biscuits, or any part of malty. Putting this spent grain into the refrigerator will help extend the shelf life by about 2 days. Yet the same issue will arise, as the percentage of water in the spent grain will most likely be different, each time you use wet spent grain in this homemade cracker recipe or with any other recipe calling for spent grain, that is wet.  In this recipe, I mention looking at the dough, adding more or less flour to compensate for the moisture in the grain, and how that will affect the final cracker dough. This culinary skill will help you achieve the best crackers, the texture and hydration of the dough are important, to be able to roll it out, without it being to dry or to wet, to achieve this result. One last thing about wet spent grain, it can be frozen, into smaller amounts and thawed at a later time too. The spent grain can be portioned out, frozen, and packaged to prevent freezer burn, and lasts about 6 months.

To make spent grain that can last longer than 24 -48 hours, you need to make dry spent grain. This is essentially drying spent grain in a low-temperature oven, that will evaporate the moisture, without toasting the spent grain. This is important, as the barley has already been malted, which means it has been toasted or kilned. To make dry spent grain is easy… You can make as little or as much as you want. Take the fresh spent grain and put it in cheesecloth or other cloth to ring out the grain as much as possible. This will help with a drier spent grain, requiring less oven time. Preheat your oven to 250°F | 121°C, on convention, if your oven has this option. This setting will help circulate the air, drying the spent grain faster. With this low heat, the chance of burning or even toasting the spent grain is minimized. Spread the as dry as possible spent grain onto sheet trays or cookie sheets, in a consistent layer, about 1/2 – 1/4 thickness. The idea is to have an even layer of the grain, with maximum exposure to the warm air, to dry the spent grain. Depending on the moisture content, this can take 45 minutes to 2 hours. Check the spent grain, about every half hour, rotating the tray(s) and stirring the grain. Once all the water has evaporated, let the dry spent grain cool before placing it into a storage container, such as a wide mouth mason jar or other seal-able | airtight container. This dry spent grain will last for about a year, with little change, as long as the grain was properly dried before storage. If the grain is damp, the likelihood for mold in your spent grain is high… You can use dry spent grain in many different cooking | baking applications and it is easy to have available in this format.

To flavor your homemade crackers, I have created 4 different flavorings to help season to the final dough.  Caraway,  Lemon Cracked Pepper, Za’atar (a Middle Eastern spice blend), and a Belgian Wit flavored recipes are below the dough ingredients. Make one or all 4 types of crackers, the choice is up to your tastes. Get adventurous with your toppings, creativity is taking risks. Rosemary Lemon, Grains of Paradise with Orange zest, chili pepper, and garlic, the choices are up to you.

These Homemade Brewers Crackers with Spent Grain are perfect alongside your next cheese board, charcuterie platter, perfect as a foundation to a canape, or used as a quick snack!  This a base recipe that can be modified depending on what style of spent grain and wort | beer that is used to build this recipe.  And what you put on top of them, is up to you!

Makes: 4 large crackers, that can be broken up into small or larger size crackers. 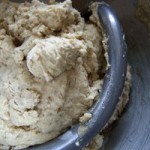 Ideally, when making this recipe you save a cup of wort from the mash, so the spent grains being used are re-hydrated with the same flavor.  While not critical and it will give you different flavor options and combinations if you use beer instead of wort.  You can also use a beer that came from the spent grains, to add a twist this way as well.

If you don't have any wort, you can use a pale ale, IPA, or a brown ale for this recipe.  But the flavor opportunities are endless, just as are the topping and serving of this cracker with many different items.

This recipe can be used with Tripel Cured Salmon Caviar