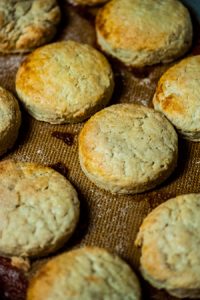 This shortcake recipe was inspired by flavors I remember enjoying as a kid. Barley flour adds a slight nuttiness, while the sugar adds just enough sweetness and the sour cream contributes a slight tart tang in the finish. Together, these differences make this shortcake different than a biscuit, opening the door to several different applications.  This Barley Shortcake will enhancing the Hopped Strawberries and the Witbier Curd to create a Beer Cuisine twist to Strawberry Shortcake.  Try these with your favorite jam  | jelly recipe for breakfast or as a snack, to using mixed berries or other beer soaked fruit, to make your own shortcake dessert.

Instead of using plain sugar, try these Barley Shortcakes topped with Hopped Sugar. 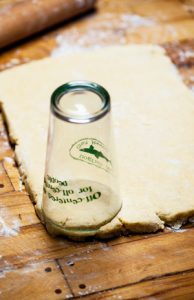 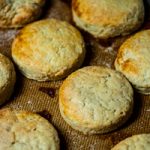 This Tangerine IPA Yogurt Sauce recipe adds a nice bit of tang from yogurt, some