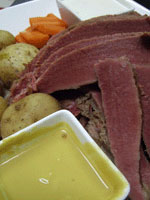 Mustard.  It’s one of those multi-use condiments that I don’t know what we would do without it. Enter Mustard Ale Sauce, using beer with mustard to making a Beer Mustard sauce. This easy-to-make sauce has a perfect balance between the light spice that mustard inherently has mixed with a touch of honey for contrasting sweetness and a floral hop flavor from the American IPA style beer. While maybe this recipe doesn’t cook with beer, it uses beer as an ingredient to add its flavor properties, becoming a key component in the mix of mustard, honey, and beer.

This Mustard Ale Sauce recipe is wonderful served alongside my Stout Cured Corned Beef and Cabbage recipe. Try it alongside my Beer Brined Chicken recipe for a picnic, day at the beach, or camping trip.  Buttermilk Fried Pale Ale Beer-Brined Cornish Game Hens or Grilled Pale Ale Beer-Brined Cornish Game Hens is another delicious application, for this muster beer sauce. Or use this with smoked brisket | pastrami to make a killer sandwich that a Pit Master would be jealous of. This sauce is more than a beer dip or honey mustard sauce. Try using it as a dip for vegetable crudités, as a salad dressing with some bitter greens, or alongside some grilled | roasted seasonal vegetables. This beer mustard dip can be used to garnish a grilled or pan-fried pork chop, roasted leg of lamb, or used to toss pulled pork in. This Mustard Ale Sauce can be used in so many culinary applications! The possibility of what to serve with this recipe are almost endless.  Please share in the comment section, how you use this Mustard Ale Sauce!

While I like the citrus elements of an American Style IPA for this recipe, the beer can be substituted with a different style. A smoked beer, such as a Rauchbier would totally change up the flavor profile. A stout | porter would also add a roasty, coffee, chocolate element to create a counterpoint to the sweet honey and astringency of the mustard’s heat.  A malt-forward beer style, such as a Strong Ale, Scottish Ale | Wee Heavy, English Old Ale, or Brown Ale would add a delicious malty element, complimenting the sweetness and flavor of the honey too. The beer used to make this recipe will change the flavor and what it is used on. Enjoy the discovery of cooking with beer!

Pliny the Elder from Russian River Brewing Co. has such a wonderful, rounded hop flavor/bitterness. It has the citrus, the herbal, the dank, and the slight earthy finish, with a clean dry malt backbone that makes the hops shine.  Mixing mustard into an IPA, with a touch of sugar, the hops stand out but are brought back with the mustard kick.  Another Double IPA, Blue Dot from Hair of the Dog, Imperial IPA, or just your favorite IPA would also work. 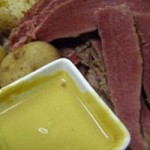 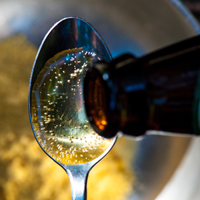 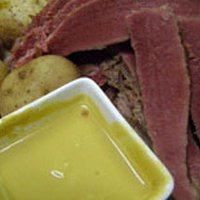 Tabbouleh or tabouli is a vegetarian | vegan salad made with cracked wheat called bulgur.