There are desserts that bring back memories and nostalgia.  Pudding definitely falls in this category, some might even call it comfort food. Chocolate Stout Pudding is an easy to make and so versatile pudding, as this recipe can be flavored many different ways. The addition of stout to this chocolate pudding recipe gives extra depth in its natural roasted flavors, enhancing both the chocolates nuances and adding complexity by using the alcohol to aide in flavor development across the palate.  The bitterness also works with the chocolate, creating a larger umbrella of flavor for your palate to appreciate. As there are so many different varieties of stout to chose from, when cooking with beer, each will add its own flavor elements to the final recipe. Oatmeal Stout, English Stout, American Stout, Irish Dry Stout, Foreign | Export Stout, American Imperial Stout, Milk | Sweet Stout, Russian Imperial Stout, or other Pastry Stout can be used in this recipe. Think about the flavors in the stout that you are going to cook with. As anytime you are cooking with beer, taking an extra minute to see the dominant flavors in the beer style being use and how to best compliment those flavors will make this Chocolate Stout Pudding further stand out over an ordinary chocolate pudding recipe.

As this is a Chocolate Stout Pudding, a good quality chocolate will also benefit the final pudding. I like using darker chocolates, with a higher percentage of cocoa beans to milk or sugar. I suggest chocolate that is at least 68% to upwards of 90%, The higher the percentage, the more bitter the chocolate will be. Those bitterness compounds will blend with the stout beer being used, to increase the flavor umbrella of what bitterness becomes.  Roast, coffee, chocolate, espresso, earthy, vanilla, caramel and other flavors combine on the palate, and can be further enhanced with the right cooking beer. I love the chocolates from TCHO Chocolate

Once you make this Chocolate Stout Pudding recipe, its hard to go back to regular chocolate pudding. 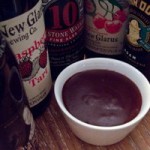 There are so many different types of stout on the market.  This is a good thing, as each stout will impart its own character, flavor nuances and add a different twist to this recipe.  Whether you like regular stout, milk/sweet stouts, oatmeal stouts, chocolate stouts, coffee stouts, Irish dry stouts, imperial stouts, imperial stouts aged in bourbon barrels (or other barrel types), they will all work with this recipe.  When I think of chocolate and stout, I can’t help but think Bison’s Organic Chocolate Stout, Rogue's Double Chocolate Stout | Young’s Double Chocolate Stout or North Coast Brewing Co. Old Rasputin Imperial Stout.  While a seasonal Firestone Walker Velvet Merlin Oatmeal Stout and Brooklyn Brewery's Black Chocolate Stout works beautifully in this recipe too...

If you want to add another element to the final flavor the recipe, you can use a different beer style all together.  Something with cherry? This will add a cherry chocolate flavor to the finished recipe.  A roasty brown ale will add more melanoidin, increasing a caramel flavor, great if using a milk chocolate over a antioxidant rich dark chocolate.

I would recommend a stronger, more assertive chocolate, being higher in cocoa percentage, like Scharffen Berger 70% Cacao Bittersweet, Valhrona Guanaja Dark 70% Baking bar or a Lindt 70% Dark Extra Fine. If you prefer milk chocolate, you may substitute that instead and the resulting pudding will have a caramel undertone to the finish pudding.

To pair beers with recipe, I would go a totally different direction than pairing with a stout.   This will help cut the chocolate on chocolate and create other elements to the pairing.  Try a New Glarus Raspberry Tart or Wisconsin Belgian Red, Hair of the Dog Adam or Cherry Adam (from the wood), Rochefort 10 (enhancing some of the dried fruit and vanilla flavors in the Quadrupel), Founders Brewing Co. Rubaeus or Liefmans Kriek-Brut. This is a great base recipe, which can be transformed many different ways and turned into some incredible dessert recipes.  Here are a few ways this recipe can be incorporated into other desserts:

If you are using a barrel aged stout in this recipe, try substituting the vanilla extract to pure bourbon, increasing the amount to a tablespoon or two.

The below Nutritional Information below is calculated and not lab tasted.